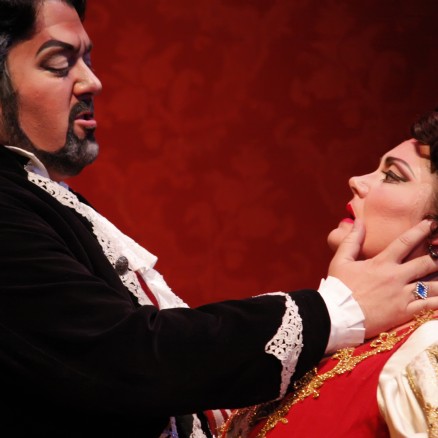 Her 2012-13 season engagements included singing the title role in Tosca in a return to Kentucky Opera, in her debut with Portland Opera, and with Pensacola Opera; the role of Becky Felderman in Ricky Ian Gordon’sMorning Star with Cincinnati Opera; Sieglinde in a staged presentation of Act I of Die Walküre with Dayton Opera; Santuzza in Cavalleria Rusticana with Opera Delaware; Judith in Bluebeard’s Castle with Opera Omaha; and returning to Peoria Symphony Orchestra as soloist in Mahler’s Symphony No. 4, Mozart’s A questo seno deh vieni, and Beethoven’s Ah, perfido.

Recent engagements include her return to Sarasota Opera in the title role of Vanessa, her debut with Opera New Jersey as Tosca, joining the roster of Santa Fe Opera for Tosca, soloist with the Peoria Symphony Orchestra in excerpts from Collins’ Daughter of the South, with Quad City Symphony as The Marschallin in excerpts from Der Rosenkavalier, at the Ravinia Festival under James Conlon in Rachmaninoff’s The Bells. Other recent successes include The Woman in Schoenberg’s Erwartung in a return to New York City Opera; Santuzza in Cavalleria Rusticana with Kentucky Opera; the title role in Tosca with Opera on the James; and an appearance as soloist in Dvorák’s Te Deum with the Cincinnati May Festival. She also appeared in recital with both the Cincinnati May Festival and Bethune-Cookman University; as Santuzza with Sarasota Opera; sang the title role in Tosca with Opera Delaware; returned to New York City Opera for Hugo Weisgall’s critically acclaimed Esther; sang Zemphira in Aleko with the Cincinnati May Festival; Donna Anna in Don Giovanni with Opera North; Tosca with Sarasota Opera, Central City Opera, and Opera North; Marietta in Die tote Stadt with Washington, DC’s Summer Opera Theatre Company; the Countess in Le nozze di Figaro with Toledo Opera, Utah Festival Opera, and Pensacola Opera; the title role in Madama Butterfly with Colorado’s Emerald City Opera; and Musetta in La bohème with Glimmerglass Opera. Her successful debut as Female Chorus in The Rape of Lucretia with Chicago Opera Theater was followed by her return as Miss Jessel in The Turn of the Screw and as Fortuna in Monteverdi’s L’Incoronazione di Poppea.

Previous highlights include Die tote Stadt with New York City Opera; Adina in L’elisir d’amore with Dicapo Opera Theatre; Mimi in La bohème with Emerald City Opera; Fiordiligi in Così fan tutte with Opera Domani; the title role in Iris with Teatro Grattacielo; Micaëla in a fully-staged production of Carmen with the Amherst Symphony; the title role in Regina with Bronx Opera; Violetta in a fully-staged production of La traviata with the Sioux City Symphony; Arminda in Mozart’s La finta giardiniera at Amherst College; the Daughter in a touring production of Strawberry Fields with Glimmerglass Opera; First Lady in The Magic Flute with Opera Festival of New Jersey; Marietta in the world stage-premiere of Chadwick’s The Padrone; Rosalinde in Die Fledermaus with Boston’s Commonwealth Opera; and a staged interpretation of Schubert’s Die Winterreisewith the Jacques Thibaud Trio.

Concert engagements have included Beethoven’s Symphony No. 9 with the National Chorale at Lincoln Center’s Avery Fisher Hall; Barber’s Knoxville: Summer of 1915 with the Muncie Symphony; Mahler’sSymphony No. 4 with the Green Bay Symphony; Mozart’s Requiem with Albany Pro Musica; both Brahms’Requiem and Carmina Burana with the Lynchburg Symphony; Strauss’ Vier letzte Lieder with the Amherst Symphony; a Wagner Concert with the Wagner Society of Washington, DC; an Opera Gala with the Green Bay Symphony; Violetta in La traviata (concert) at Wisconsin’s Fox Cities Performing Arts Center; and her Carnegie Hall debut in Bach’s Magnificat with the Manhattan Philharmonic.

Ms. Thomson resides in Cincinnati, Ohio and received her Graduate Diploma in Performance from The New England Conservatory of Music.